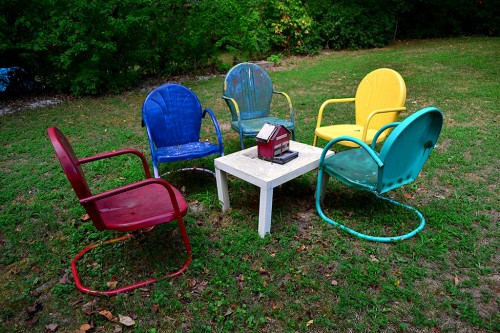 Funny how you look at things without seeing them. I was in the back yard when I asked Mother, “Aren’t those the same chairs we had in Advance?”

“Two of them were,” she confirmed. 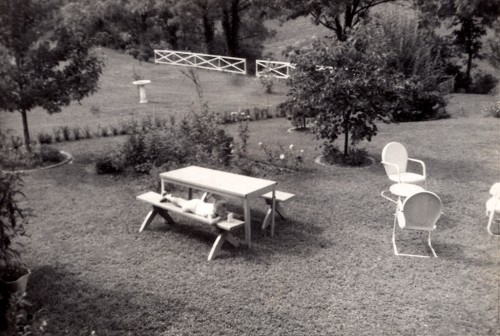 I was pretty sure I have photos of those chairs in my grandparents’ yard when I was only a couple of years old. I couldn’t find them right away, but I did spot them in the Kingsway back yard in the summer of 1960.That means they’ve survived nearly three-quarters’ of a century of rain, snow, heat and cold with only the application of a little paint every decade or so.

We expect every season to be the last for the redbud tree in the right center of the photo, but it keeps coming back every spring.

Brother Mark, stretched out on a bench in contemplation, is trying to figure out what color he’s going to paint those chairs half a century later.

Maple is all grown up 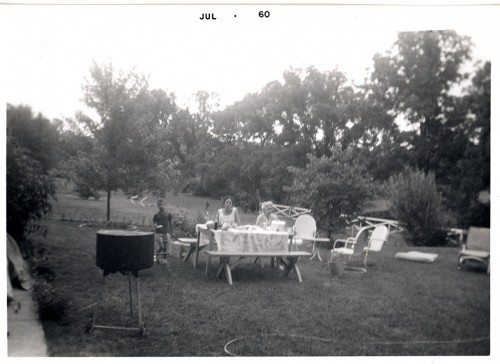 That little maple tree sapling at the left side of the two photos is about 18 inches across now. I keep waiting for it to fall over and hit the house. That’s Brother David, Mother and my Grandmother Elsie Welch in the picture. 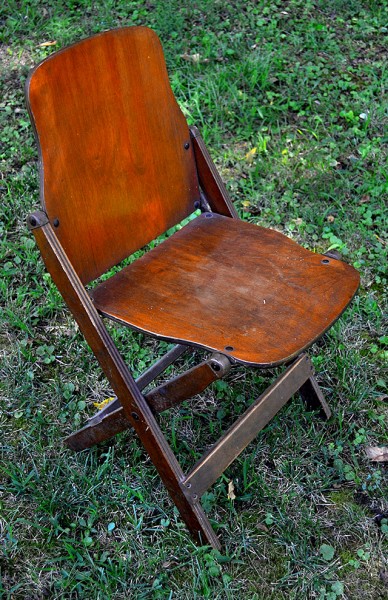 I shifted my weight while typing this and was reminded that I’m sitting on what we call the “funeral home chairs.” It’s a set of wooden folding chairs that Mother said was used in a teen hangout in the basement of my grandfather’s liquor store in the Prather Building in Advance. There are five of them around the table I use as a work area in the basement when I’m in Cape. I have three or four in West Palm Beach.

If Mother is 90, that would make those chairs at least that old, because I can’t imagine my grandfather buying new chairs for a bunch of teenagers. I’d creak too, if I was that old.

In fact, now that I think of it, when I shifted my weight, I’m not sure if the sound was coming from the old chair or from me.

Made it from Cape to Kentucky Lake to get Mother’s trailer set up for her to stay a few days. Tuesday night found me in Newport, TN. I got to see some beautiful mountain scenery going through the Smokies to the Winston-Salem area Wednesday to visit Don Gordon, a guy I worked with at The Missourian.

After a couple of hours of gabbing, I took off to see my old paper, The Gastonia Gazette. The first thing I discovered is that it’s been rebranded The Gaston Gazette. Then, I went to the corner where it should have been (and where the GPS said it was) and couldn’t find it. The shopping mall that used to be across the street was still there (but much larger), but no newspaper. The GPS gave me an alternative location. I pulled up to the building and thought it looked vaguely familiar, but the location felt wrong. It turns out there’s a Walgreens where my old paper was and this is a new joint. I’m not holding out much hope of finding much I can remember here.