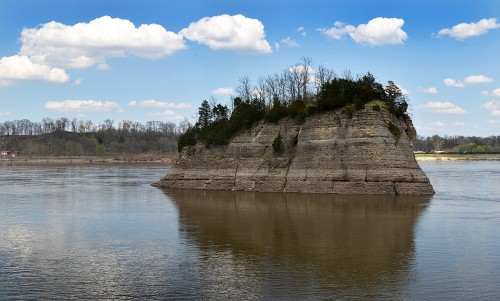 I’ve shot Tower Rock from about every angle except underwater (and I came close once to doing that when Brother Mark and I walked over there). I’ve been on the top of it, flown over it and have seen it from both the Missouri and Illinois sides.This is the view from the parking are where most folks see it.

The one place I HADN’T seen it from was the overlook.

In the summer and fall, the leaves are too thick to see anything and in the winter, I’m not crazy about a long, cold walk.

Overlook hangs out over hill 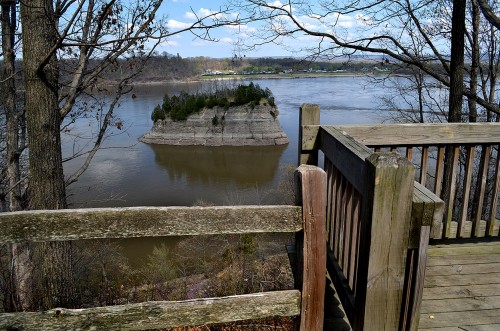 On April 18, though, I didn’t have any excuses. The day was cool enough that I wouldn’t overheat, the sky was blue and there was no rain around. I drove across the railroad tracks (Stop, Look and Listen) and went up the road a couple hundred yards until I came to a wide spot that looked like the start of the trail.

Mother suggested I take a couple of deep swigs of water before heading up the hill. She said she’d stand by to dial 9-1-1 if I keeled over. I told her not to bother. There’s no signal down there.

The climb is moderately steep in some places, but it flattens out toward the top. You’ll definitely feel a burn in your thighs if you aren’t used to exercise. When you get close to the top, you look at the tiny platform hanging out over space and feel a little twinge of concern, but closer examination shows that it’s solidly built and in good condition. 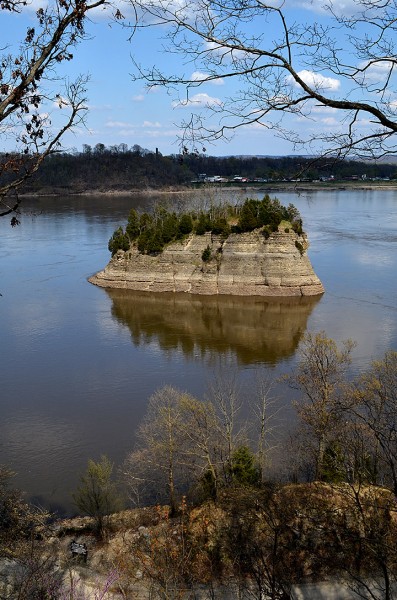 Photo geek stuff: I keep Hoya circular polarizing filters on my lenses all the time. I find that being able to kill reflections improves many photos, even indoors. It also protects the front element of my lens from scratches.

Most folks think of them useful only to make skies darker, but that’s not the case. When I was rotating the filter to get the best result here, though, I quickly saw that the reflection of The Rock in the river added to the photo, so I kept as much of it as I could. It was a lot less interesting picture with the reflection knocked out.

Higher than The Rock 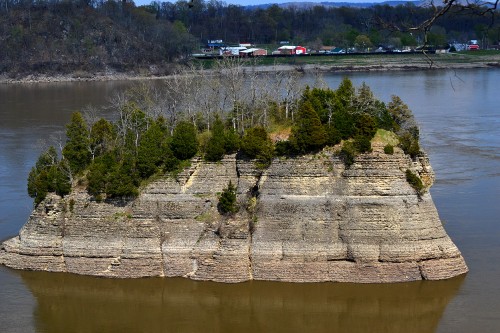 Overlook is the right word. You are clearly higher than Tower Rock. If you are going to see it, better hurry, I think the trees will have too many leaves for a clear view before long. 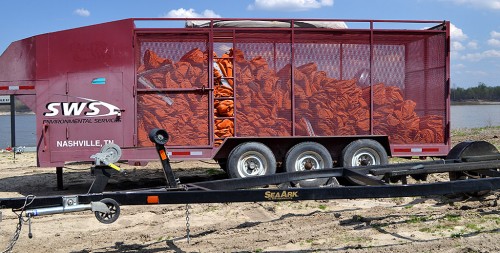 While we were in Altenburg, we heard scuttlebutt that a barge with fuel of some kind had run aground on a sandbar north of Wittenberg and that equipment was being staged at the boat ramp there. We saw about a dozen vehicles and two trailers of orange flotation booms in the parking lot, but there was nobody around to talk with.

Some of the trucks and trailers had “SWS Environmental Service” on their sides.

I called my friends at The Missourian with the tip, but told them I didn’t see much photo opportunity there, and I wasn’t even sure it was worth a story. I haven’t seen anything in the news, so either they couldn’t find out anything or it really wasn’t worth covering.

I didn’t offer up a photo because the last time I went in with a spot news photo I was told they don’t pay even a token amount for submitted photos these days.

Wonder if this was it? 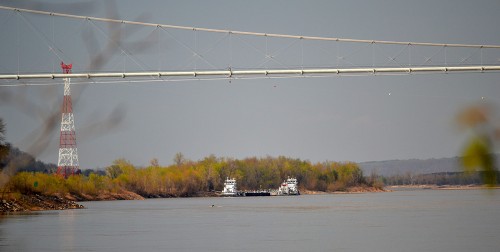 On the way from Tower Rock, we could see some activity close to the shore north of Wittenberg. We could tell that it wasn’t a string of barges. I heard traffic on the marine radio about trying to make fast some lines, but they were afraid they were going to foul. The action was too far away to see clearly, plus I was getting hungry.

If you are interested in my small picture book, Tower Rock “A Demon that Devours Travelers”, stop by the Lutheran Heritage Center and Museum in Altenburg for a copy.