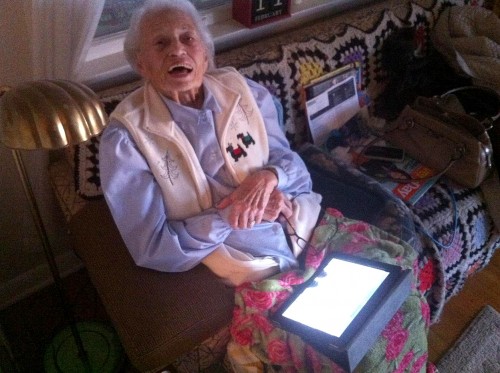 Mother’s been complaining that her get-up-and-go has got up and went. She hasn’t had a lot of pep and she’s been getting out of breath. Brother David has been in town from Tulsa doing a bunch of odd jobs, so he went with her to the heart doc to see what was causing it.

Without going into a lot of detail that I don’t really understand, he said she needed to get the top two muscles of her heart jump-started.

David suggested that he could do it in the parking lot if he could figure out where to hook up the red and black clamps, but the medical staff strongly discouraged such activity. “From what we know about her, if you hook them up backwards, she might blow out the battery in your car,” they warned him.

It turned out it only took one shock to get her heart back in rhythm and all synched up. She’s going to need to have the batteries in her pacemaker replaced soon, so she’d better hurry up before they close the Radio Shack in the mall.

The doc said her shortness of breath should get much better now. “Overall, she’s a tough bird,” he added.

Boy, don’t WE know that.

On the way home, they stopped at a worried friend’s house to give a health and welfare report. She had been calling the hospital all day for an update. The finally told her at 4 o’clock that Mother had been released. “Was she still alive when she was released?” she asked.

So, Mother is back home in the glow of her iPad catching up on what she missed during the day. You may not be able to reach her by landline because she’s been having phone problems.An ATT tech is supposed to come check it out Thursday.

Thanks to David for being there and for taking this photo.

8 Replies to “Mother’s Back in the Game”