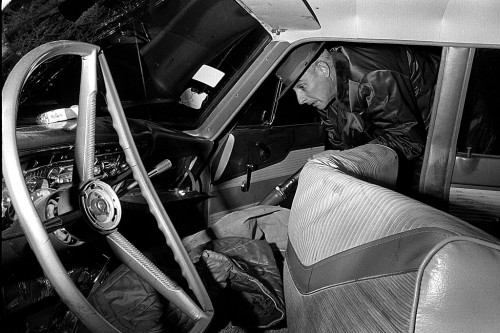 This photo is a two-fer. It shows one of my favorite law enforcement officers, Trooper Norman Copeland, and the reason I’m a fanatic about seat belts.

Trooper Copeland is working a two-car, head-on crash that happened on Hwy 61 north of Fruitland. Six people were taken to the hospital. The car didn’t have seat belts or any of the modern safety devices, and you can see how the passengers became flying missiles.

The steering wheel is bent and broken; the back of the front seat is deformed from the rear seat passengers pitching against it. There’s a hole punched in the windshield from someone’s head and there’s a big dent in the dashboard, also from a head.

Why you should wear a seat belt 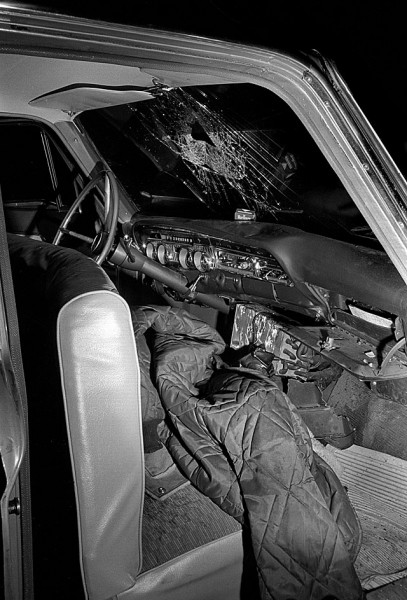 There were no fatalities, but injuries included 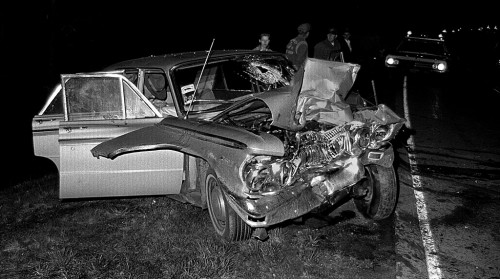 Norman Copeland was a World War II Vet who served in both Europe and Asia. After he joined the Highway Patrol, he moved to the Cape Girardeau zone in 1962. He was promoted to corporal in 1967, and to sergeant in 1967. He served as zone commander until he retired in 1983.

He became Cape County Sheriff in 1986 and served until he resigned in 1994.

At a dinner in Copeland’s honor when he retired, Presiding Circuit Judge Bill Syler said, “Nobody ever looked better on a witness stand as a highway patrolman than Norman Copeland,” adding that his gray hair, neat uniform and warm smile made him a convincing witness to any jury.

That was what I remembered about Trooper Copeland. It could be the middle of the night in a driving rainstorm and he wouldn’t have a hair out of place. He was always cooperative at the scene and went out of his way to answer all of my rookie reporter questions. There was a Missourian editorial complaining about access after he became sheriff, but I always found him to be helpful.

The photo at the top of the page may have won a minor spot news photography award, but I can’t be sure.