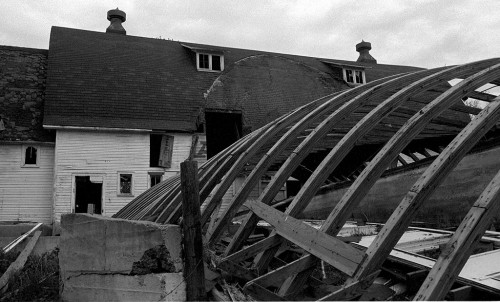 When I posted photos of a huge barn with a curved roof yesterday, I hoped someone would be able to identify it. There were a number of good guesses, but one of my regular readers who is too shy to post publicly – we’ll call her Shy Reader in the future – came up with the answer.

The mystery barn was on the I. Ben Miller Dairy Farm at N. Sprigg and Bertling. It was torn down in 1966. 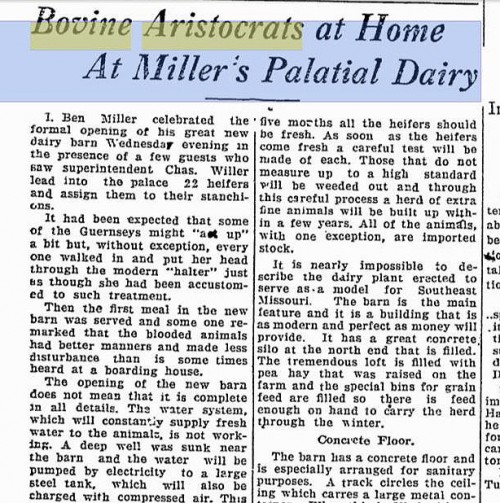 The I. Ben Miller Dairy Barn was such a big deal that it got a got a two-column front-page writeup in The Southeast Missourian on Oct. 21, 1920. Click on this link to read the full account of all the modern features in the barn.

(The Missourian’s front page that day proclaimed that it had “more than 5000 paying subscribers and is delivered each evening in over forty Southeast Missouri towns by carriers.” It goes on to claim that “No other daily paper in a city of 10,000 has as large a bona fide circulation. The Missourian guarantees advertisers five times as many bona fide subscribers as any other paper ever published in Cape Girardeau.” 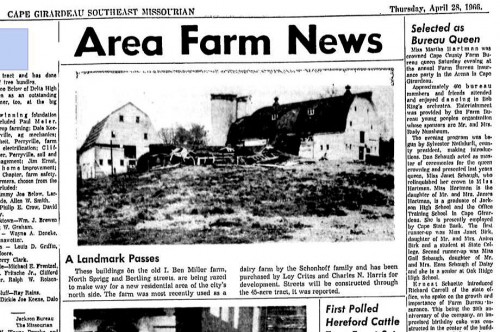 Shy Reader, who is a much better researcher than I am, said she couldn’t find where The Missourian published the photos I ran yesterday, but there are some holes in the Google Archives for that period.

She DID find this photo taken about the same time, which shows the barn from a different angle. There’s no doubt that they’re the same building.