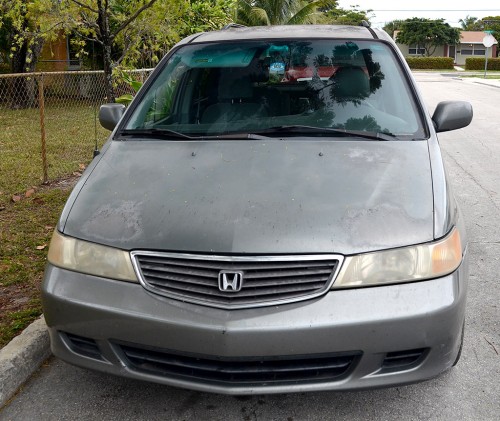 My 2000 Honda Odyssey EX turned over 200,000 miles this week. I was hoping to take a picture of the odometer when it did it because I’ve never driven a vehicle that far before, but it rolled over while I was running a bunch of short errands in town, and I missed it.

At about the same time, Son Adam was looking to trade up from his 2012 Odyssey to a 2014 and surprise Wife Carly. They have two boys, and a third on the way. While we were talking about it over dinner, I asked him how much he wanted for his old van. He shot me a number that was more than I wanted to spend, but, since I know the history of the van and he swore it was in excellent condition, I told him I was interested.

He called me last week and said he had found one that he liked, had been haggling with a very nice saleswoman all day, and had finally gotten to the price he wanted to pay. He asked if I’d drive down with him to pick up the car. We took a test drive, they washed it, gassed it up, and we were ushered into a small room to sign the paperwork. He signed paper after paper until he got to the one that counted: how much it was going to cost.

While he was looking it over, he said, “This is $795 more than we had agreed on. What is this item?’

Before the nice saleswoman could answer, I said, “That’s probably the dealer’s obscene profit surcharge.”

Nice lady brought in the sales manager, who was everything that you would expect one to be. He tried to justify the number, but Adam pulled out a sheet of paper where that number had been crossed out during negotiations.

Sleazy sales manager said, in essence, “Take it or leave it.”

Without even looking at each other, Adam and I stood up and walked out. 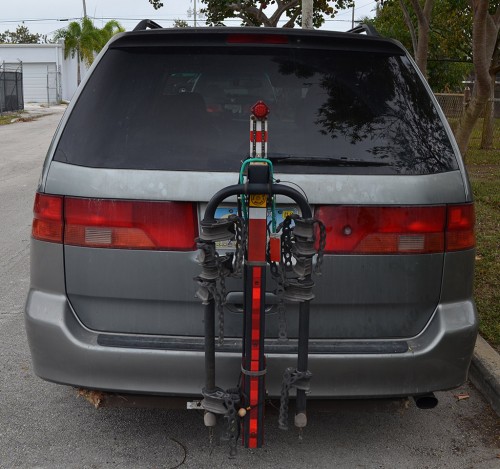 Today, The Kid called and said he had found a better van for less money. Did I still want his? Yep.

So, here’s my problem (other than coming up with the money for him): I have a van to get rid of.

It’s not all that pretty from the outside: the clear coat has worn off in three places on the hood and across the roof. When I took it in to a body shop a couple of years ago to see if I should have it repainted, they said if I didn’t care how it looked, not to bother. The paint itself was in good shape and it wasn’t rusting.

I think an ugly car is an asset: it’s less likely to get broken into and people don’t try to bluff you in traffic.

It has a couple of pushed-in places on the rear side doors from careless people in parking lots, but I’ve never bothered to try to pull them out. 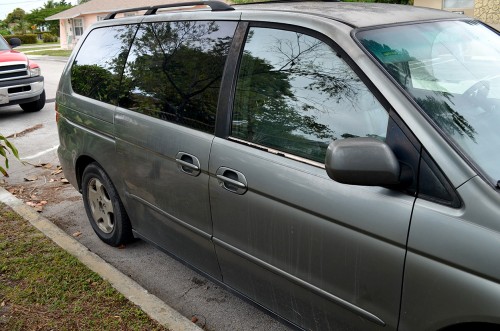 I had all the expensive stuff like the timing belt, water pump, belts and the like replaced in 2013 when it went in for a major tuneup. When I had that tuneup done, I asked the mechanic at Southend Service Station in West Palm Beach to check everything so I could decide if I should trade it then. He couldn’t find anything that would make me want to start paying car payments on a new one. 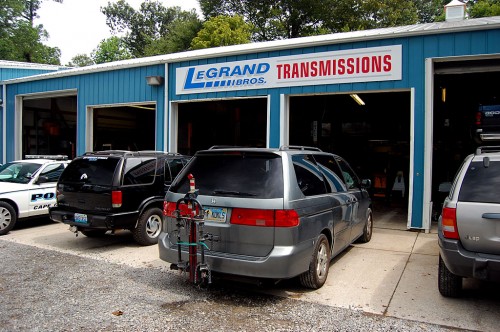 The transmission was rebuilt in 2011 at LeGrand Bros Transmissions in Cape and has a 5-year, 50,000-mile national warranty that is transferable. The work was done when the odometer showed 169,807, so it still has months and miles left on the warranty.

The AC and heater work well and have been Road Warriorette approved. I replaced the front brakes last year; the rear ones squeal a bit, but they stop fine. I wasn’t going to fix them until I got ready to head back to the Midwest in March. The catalytic converter was replaced in 2012.

Interior is in good shape 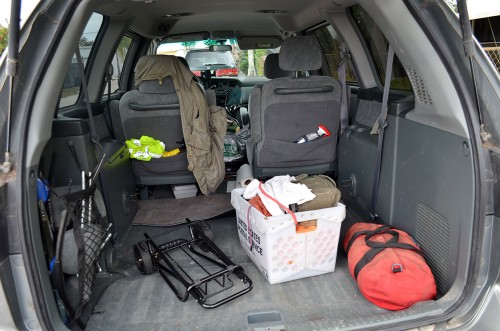 The seats and interior are OK, with no rips or tears. The driver’s seat electric motor quit working, so I replaced the cloth seat with a used leather one last year.

When the car was a couple years old, Wife Lila and her sister, Marty, picked up a can of blue paint at Lowes. They didn’t get the top on it tight enough, and it went rolling around in the back. Most of the paint came out of the carpet, but you can still see a little color on the legs of one of the middle row of seats. (It doesn’t show in the photo.)

The power sliding doors open and close, but sometimes the door-open warning buzzer comes on. I don’t have rear passengers enough for me to diddle with the sensors to see if I can make them work better. I have a couple tricks I can show anyone who is interested. (It’s not so annoying that I was ever tempted to disconnect the bleeping buzzer.)

I had a 2″ trailer hitch put on to hold a bike rack, but it’s never been used to haul a big boat or trailer (although it’s rated and wired for them). 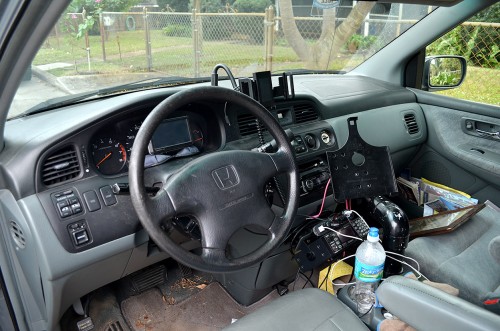 As you can tell, I didn’t clean the car up before I shot these photos. Adam said he wanted them quick and dirty, and that’s what he got. The cellphone holder is held on by suction cup, so it’ll come out clean. The iPad holder I made out of a piece of PVC pipe will leave two screw holes in the cup holder, but that’s not a big deal. The scanner will leave a couple of screw holes in the ash tray, but the good news is that all that electronic gear proves that the cigarette lighter power circuit has plenty of oomph.

Want to thaw out in Florida? 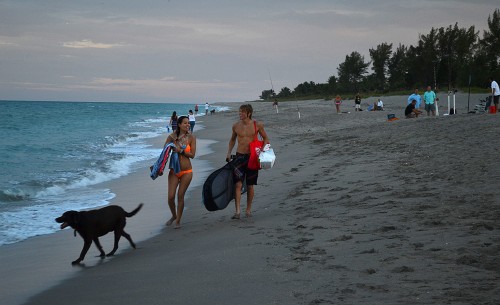 Reader Van Riehl said I should say “pre-owned” and not “used.” I prefer “proven” and “experienced.”

I’m comfortable enough with the vehicle mechanically that I had planned to put about 12,000 miles on it this spring and summer heading out to the Midwest. It’s a risk I wouldn’t take if I thought it wouldn’t make it.

It would make a good work van or be great for a family with more kids than dollars. I can’t promise it won’t break down tomorrow, but I was planning on getting another year or two out of it.

I haven’t come up with a price yet, but I’m willing to talk. If you are cold up north and want to fly down to drive it home, I’ll put you up in the guest room for a few nights while you thaw out. Bring cash.

(As always, click on the photos to make them larger. For the record, Florida beaches are usually brighter than this, but I shot that at dusk. I figured the orange swim suit made up for the dull light.)