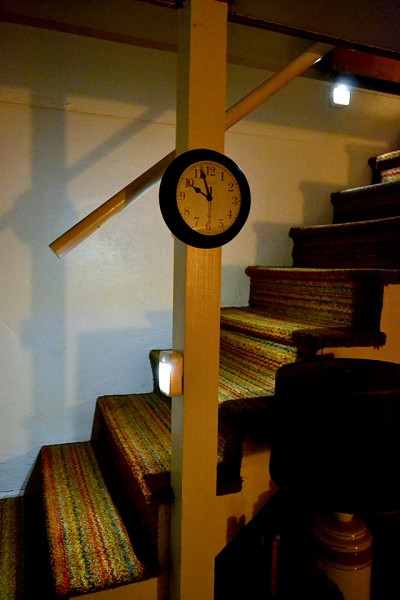 Friends Shari and Jan both commented that we should do something to put more light on our basement stairs since Mother is up and down them to feed the fireplace, do the laundry, do her bookkeeping and hide from tornadoes. I discounted them by saying, “She’s been going up and down those steps for 57 years, so there’s not an inch of them she doesn’t know.

When I stayed with Brother Mark in St. Louis on my way to and from Ohio, he mentioned, “We should do something to put more light on the basement stairs.” He’s a guy, even if he IS my brother, so I had to pay attention to what he was saying.

Our house was built just about the time Edison came up with a great idea about making light bulbs. He’d have come up with it sooner, except the light bulb cartoonists use to indicate a flash of inspiration hadn’t been invented yet.

I told Mark that the last thing I wanted to do was overload a circuit by adding another tap for more lights. We noodled around a bit coming up with all kinds of Rube Goldberg ideas until I needed to go upstairs to visit his reading library for a few minutes. 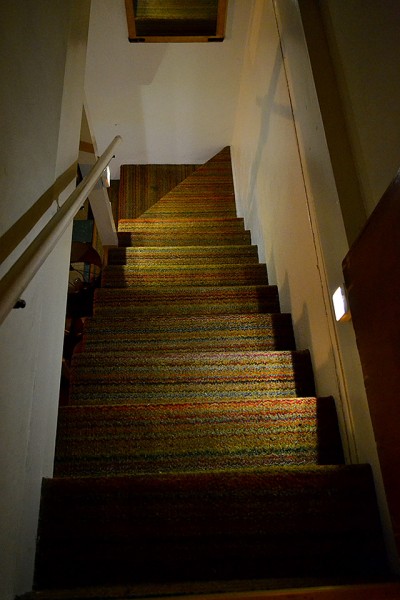 When I came back, he had discovered Mr. Beams MB723 Battery-Powered Motion-Sensing LED Stick-Anywhere Nightlight, 3-Pack on Amazon.

To be honest, I’ve bought a bunch of LED lights over the years and most of them have turned out to be junk. The Amazon customer reviews made me take a second glance, though. Of 495 reviews, nearly 400 rated the product a 4 or 5 out of 5. Most of the low ratings were for quality control issues or minor nits like the mounting tape not sticking.

I was heading back to Florida on Monday, so I ordered them Friday morning and paid a little extra for one-day, Saturday delivery. They actually arrived when promised.

Saturday night, I used the enclosed double-sided foam tape to tack the three lights where I thought they’d do the most good. Then, I went to bed without telling Mother what I had done. (Sometimes she can be a bit cranky about surprises.)

She loved her new toys

She was delighted with her new toys. She liked the way the one at the top of the stairs came on as soon as she got near the basement door, then each of the other two lights came on about two steps before she got to them. They turn off about 30 seconds after motion stops, and they turn on only when it’s dark. The lights, which are about 3.75″ wide, 3.25″ tall and about 1.2″ thick, are powered by four AA batteries (not included). The vendor claims the batteries will last about a year under normal use.

The are suitable for both indoor and outdoor use. They come with a flat plastic mount that attaches to the wall with double-stick foam tape (my method) or screws. I started to put in the screws just to be safe, but I had trouble getting them to fit into the little countersinks and decided that I’d trust the tape to hold them on. It sure seemed secure to me.

Bottom line: if you have a place that could use just a little light and you don’t have an electrical outlet nearby, these are worth a try. They won’t replace a 100-watt bulb, but they do a great job of filling in dark spots. On top of that, they slip right off the mounting bracket, so you COULD use them as an emergency flashlight if you had to. Even though mother keeps a flashlight next to the bed in case she has to make a storm run to the basement, I told her she’d appreciate having those lights if she had to make it with the power off.

How can I get them?

I got mine through Amazon. If you click on this link, it’ll take you right there, and if you order them, I get a piece of the action without it costing you anything extra. By the way, I tried to depict the actual light on the stairs as accurately as possible. It might be just a shade brighter than the real world, but not much.