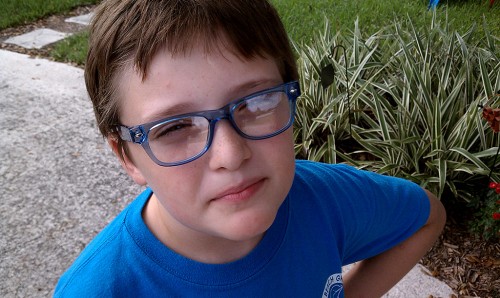 I stopped by Son Matt’s house a couple of days ago to drop something off and arrived just as Grandson Malcolm was getting home from the second grade with his new pair of glasses. From the outside looking in, they are pretty spiffy. From Malcom’s perspective, they make the world a lot sharper.

“I can read that sign over there now,” he said proudly. It was just a blur before.

Poor boy didn’t have a chance

I got my first pair of glasses in the fifth grade. My teacher ratted me out. He couldn’t figure out why I could read really well, but had trouble with board problems when I wasn’t sitting in the front row. It turned out that I was horribly nearsighted, particularly in my left eye, which tested out at about 20/200. Ironically enough, I’m left-eyed, so that’s the eye I use to shoot a camera or a gun.

The good news for both of us (he’s nearsighted, too) is that it’s one of the few things that gets better with age. The bad news is that your eyes get worse and worse at focusing at close things when you get older. I had to admit to slipping over the edge when I was working on a construction project that required me to work in 3/16 scale. I just couldn’t make out the measurements no matter how much light I threw on the drawings. It was bifocal city.

I carry two pairs of glasses 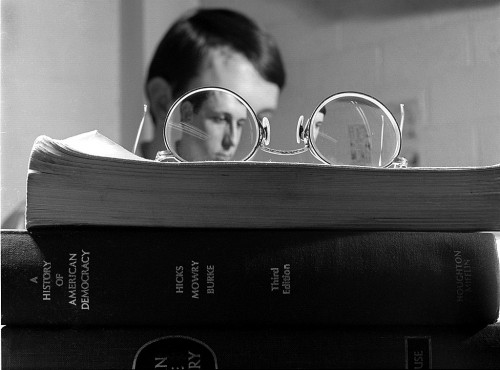 Strangely enough, my distance vision – once 20/200, if you remember – has improved enough that my latest driver’s license doesn’t have a glasses restriction on it. I still wear them all the time, but I can get by if I have to.

The farm boy behind me failed the test, too. Until, that is, he told the examiner. “I want to be a Marine.” The examiner said, “In that case, you pass.”

[That’s not me in the picture, by the way. It’s Ohio University Post Editor Andy Alexander in 1969.]

We all passed the hearing test

I still haven’t figured out the hearing test. We were all herded into a dimmed room and given black boxes with a button on the top. “When you hear a tone, press the button and hold it until the tone stops,” we were told by a guy who must have been used to dealing with the hard of hearing because he was yelling.

We sat there for a few minutes. Nothing was happening. Guys were looking around the room at their neighbors, exchanging quizzical expressions. After a few shrugs of shoulders, we all started poking the black button randomly.  After about five more minutes, Loud Guy came back and proclaimed that we had all passed.