Barb Frokler mentioned in a Facebook group called Cape Rewound that the Nowell’s Camera Shop sign that hung out over the sidewalk at 609 Broadway was in the basement of the Mississippi Mutts. I suggested to Carla Jordan, director at the Cape Girardeau County History Center in Jackson, that the sign would be a great acquisition if she could score it.

It WAS available, so I was dispatched to see if it would fit in my Honda Odyssey van. You can tell from comparing it to employee Briana Schoen that it wasn’t going to happen, even if I opened the sunroof.

Once the word got out that the sign would be part of a lobby exhibit, folks started contributing pieces of their personal photographic history. 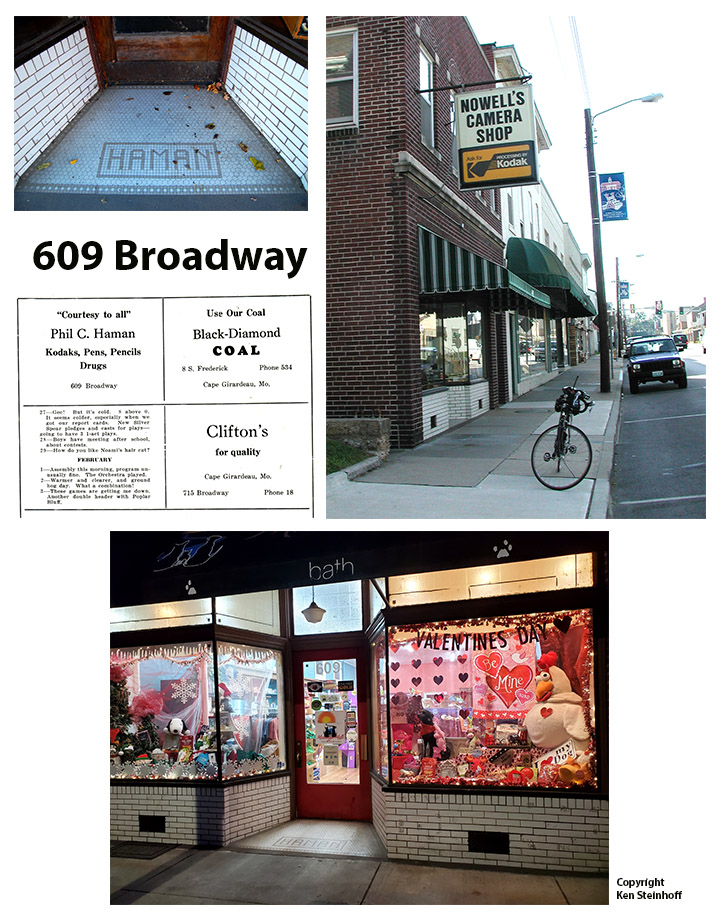 A number of businesses have called this address home. One of the earliest was Phil C. Haman’s Drugs. The mosaic tile with the name is still there.

A 1934 Girardot ad said the store sold Kodaks, pens, pencils and drugs. The display window on the right used to read “Kodaks” in big black letters.

Eastman Kodak tried to get it taken down for trademark violation, but Nowell’s successfully argued that the sign dated back to when “Kodak” was a generic term for consumer cameras. I don’t know what happened to the window, maybe it was broken and replaced with clear glass.

I took the Broadway sign photo Sept. 12, 2001, when I rode my bike all over town shooting the main streets and landmarks.

The Mississippi Mutts folks moved into the location in 2015, after starting the business at 1231 Broadway in 2012. Sherry Jennings is the owner, and Barb Frokler is the manager.  The store sells a plethora of pet paraphernalia and treats, many goodies housed in the original cabinets along the walls. (I didn’t spot any Terrytoon movies, alas.)

Linda Folsom Hatch commented on another post that “My grandparents, Carl and Quinn Bauerle, bought the camera shop building and lived in the apartment upstairs for many years…..I still have some of the old bottles from the drug store (Hamans).” 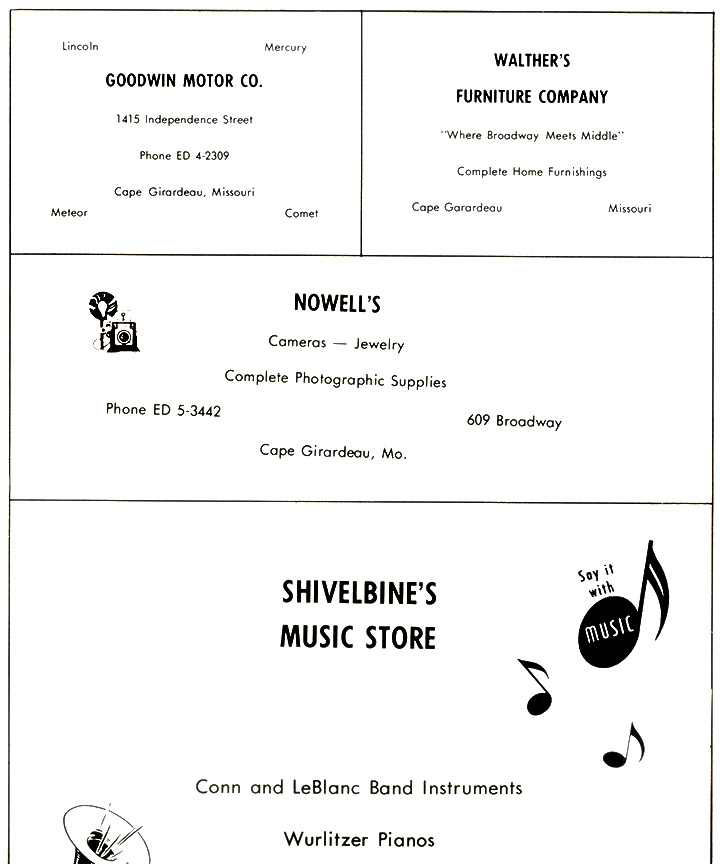 Like Haman’s, Nowell’s bought an ad in the 1963 Central High School Girardot yearbook.

Some proofreader must have been asleep. Notice that the Walther’s Furniture Company ad spells the city’s name as “Garadeau.”

I practically lived in Nowell’s

I spent many a long hour leaning on the counters in the camera store lusting after Pentax cameras and lenses. (I didn’t switch to Nikon until after a student at Ohio University sold me a Nikon F with three lenses for $150 so he could pay his rent.)

Ironically, I have very few photos from the time I hid out there. I was a kid who got paid $5 per picture (later reduced to $3 a photo for non-assigned art when John Blue calculated that my salary plus freelance photos amounted to more money than some senior reporters made).

Pictures that didn’t generate revenue didn’t get taken unless I was trying to finish out a roll.

Here’s how it works

Customers didn’t just walk in and buy a camera. Bill Nowell and his staff would help you make the right choice, then explain everything you needed to know to take good pictures.

When I did a blog post about Mary Nowell, the comment section was filled with tributes to her dad.

Try this in a big box store 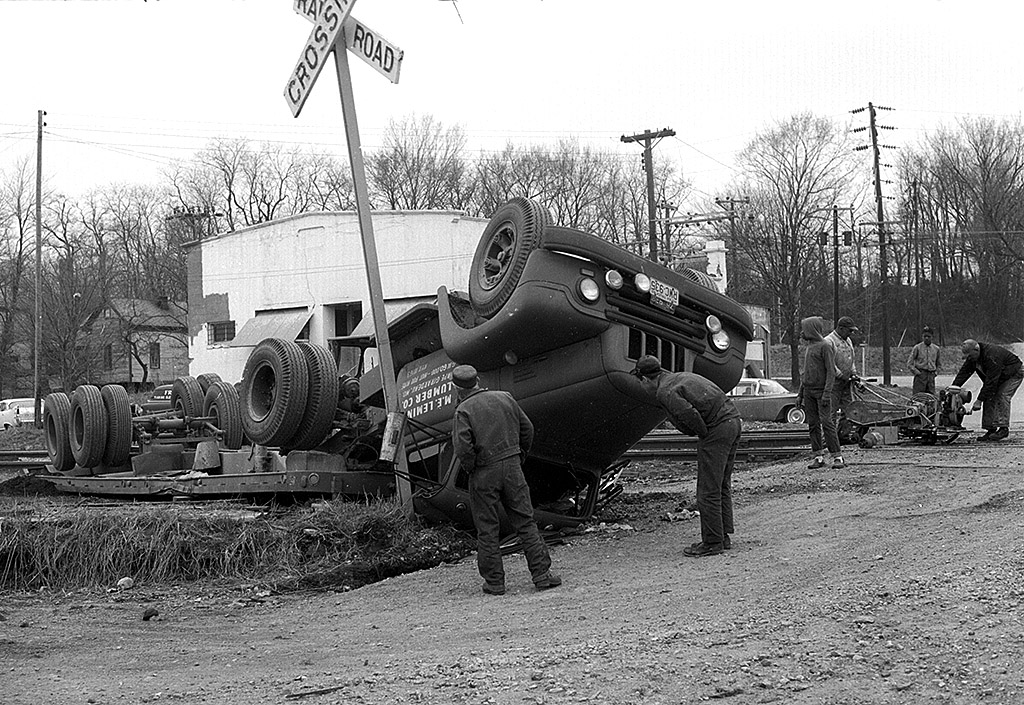 A couple buddies and I decided to skip school one afternoon. To make my exit less obvious, I left my gear in the school darkroom.

Wouldn’t you know it, one of the first things we saw was a train vs truck crash in South Cape. I dashed into Nowell’s, grabbed a Pentax, a roll of Tri-X black and white film, and shouted, “I’ll be back” over my shoulder as I bolted out the door.

When I scanned the film recently, I discovered that I had not only shot the wreck, but a fire on the same roll. You can read a full report of my youthful transgressions here.

I discovered a trove of cancelled checks written to the camera shop when I was rooting through old files. This was a place and a time when you could even write a “counter” check if you didn’t have your checkbook with you.

Mr. Nowell trusted a lot of young photographers by letting us buy on credit. I would usually pay cash for large purchases, like cameras and lenses, but I’d charge film and supplies.

I overheard Dad tell a friend of his one day, “Mr. Nowell even lets him run a charge account.” That was his form of bragging that his kid was recognized as trustworthy by a respected local businessman. It’s funny, but most of the praise I got from Dad was overheard, and not direct.

A cornucopia of cool stuff

It wasn’t just cameras, film, chemicals and photo paper. You could walk in and be tempted by all kinds of cool stuff, including black & white 8mm Terrytoon cartoon films. (I’m pretty sure I’ll run across some reels of those one of these days.)

I don’t know how he did it, but Mr. Nowell managed to snag a dry mount press for me when they were supposed to be limited to governmental agencies. It mounted hundreds of prints for contests, classes and exhibits. It currently lives at the Jackson museum.

A place known for careful listening

No customer was rushed, no matter what the purchase. I wish I could remember this saleswoman’s name.

Marty Cearnal could twist my arm

To be fair, though, he didn’t have to twist it much to sell me photo gear. If you look up “super salesmen” in the dictionary, it probably has his photo next to it.