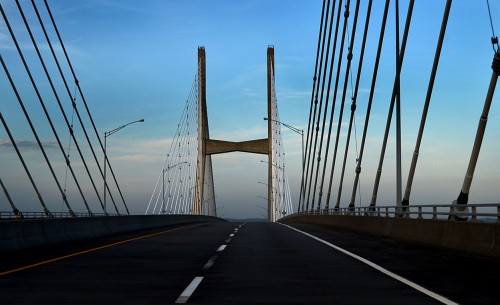 Almost every visit I shoot a series of photos when I first hit the Bill Emerson Memorial Bridge leaving Illinois for Missouri, and a series when head back out of the state. (Click on the photo to make it larger.)

No, I don’t shoot and drive at the same time. I adjust the polarizing filter and exposure long before I get to the bridge, set the zoom on a medium length and just balance the camera on the steering wheel with one hand. I shift the angle after I see the image that pops up on the LCD display on the camera’s back. It’s a matter of luck, not particularly skill.

The little green sign on the right side of the frame, just at the crest of the bridge, tells me I’m leaving the Show Me state and entering Illinois.

See you again in the summer.

[Editor’s Note: I’m doing a quick post because I have to get up before the chickens to take Curator Jessica on an airboat ride in the Everglades. I tried to discourage her by describing what would happen if the airplane propeller behind her back broke loose if the boat hit a snag at high speed: she’d turn into a pink spray the gators could suck down with a straw. Ohio Gal thinks I’m kidding, but wait until she sees it.]

One Reply to “Last Gasp of Missouri”