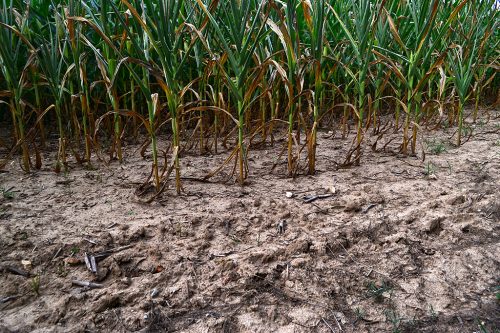 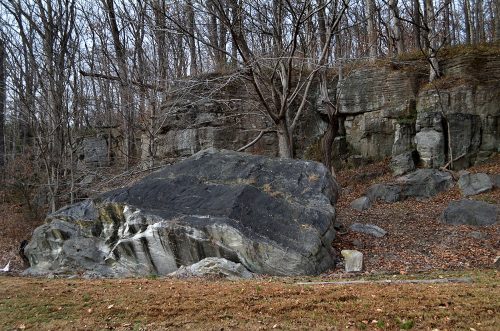 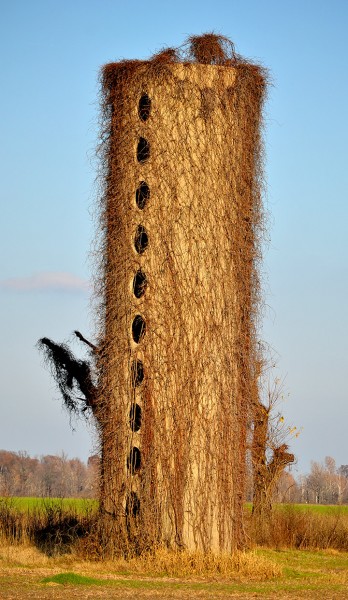 Road Warriorette Shari and I cruised Scott and Mississippi counties looking for photos to illustrate my Bootheel project. Late in the afternoon, when everything took on a golden glow, we spotted this silo on CR NN near West Granite Road north or Bertrand.

The recent cold nights must have killed whatever foliage had attached itself to the structure.

My silo ignorance is showing 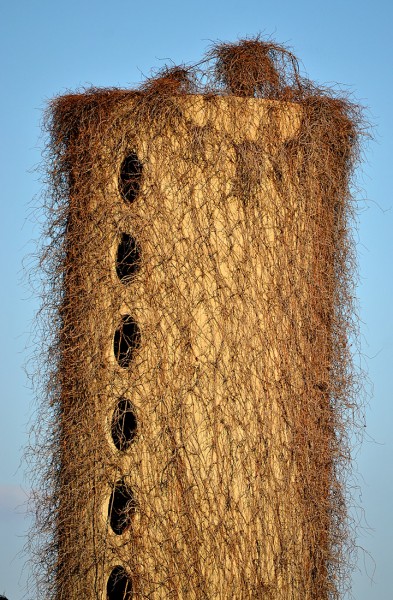 One of the problems with documenting an agricultural area is that I know practically nothing about farming.

Would someone explain why this silo (and  couple others we saw in the same area) have holes running up the side? Click on the photos to make them larger. 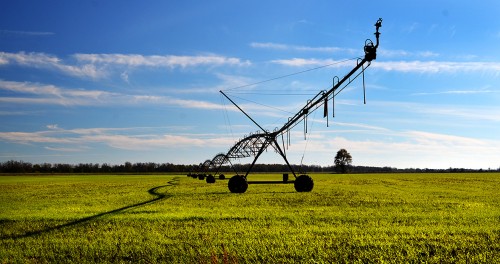 While cruising around the Bootheel this afternoon, I noticed lots of fields sporting what looked like green, green grass. I asked my guide, David Kelley, what had been planted.

He’s gotten used to my total lack of farming knowledge, so he didn’t even give me the head-shake, eye-roll I deserved. “It’s winter wheat.”

“We’ve already had one night below freezing. The cold weather doesn’t hurt it?”

“Nope.” (I discovered that wheat planted in autumn needs the cold weather to make it “head” in the spring.)

The irrigation system made me think of a huge preying mantis making its way across the field. (Clicking on the photos make them larger.) 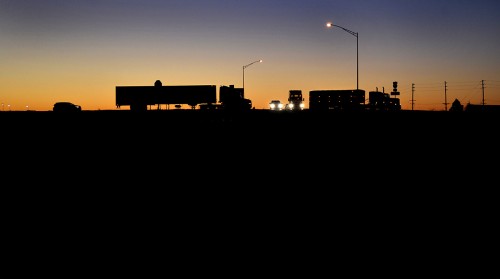 I was a little drowsy, so I pulled into the truck stop at the intersection of I-55 and 80 in New Madrid county for a short nap. It was still light when I stopped, but the sun had just dropped below the horizon when I headed out of the parking lot.

Even though it’s the same intersection where Curator Jessica spotted a Padiddle last year, I couldn’t pass up shooting a picture that will help me illustrate how the Interstate has siphoned traffic off Highway 61. 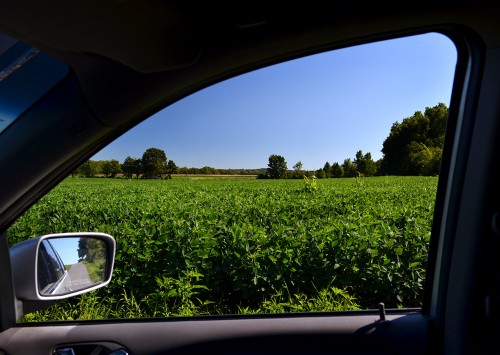 I was blasting down State Route C on the way to Cape from Altenburg when I noticed tall stalks of what I took to be corn in the middle of what I think is soybeans (my farm knowledge is somewhere between erroneous and inadequate).

Traffic on C can move pretty fast, so I turned right onto 516 at New Wells, and took the next right onto 517, which put me on a little-traveled road on the backside of my field. There was a cornfield on the driver’s side of the car.

It was from there that the errant corn must have escaped. Or, maybe the farmer hadn’t cleaned his equipment off when moving from field to field. Or, maybe a bird dropped the seed. Who knows?

What is a weed? 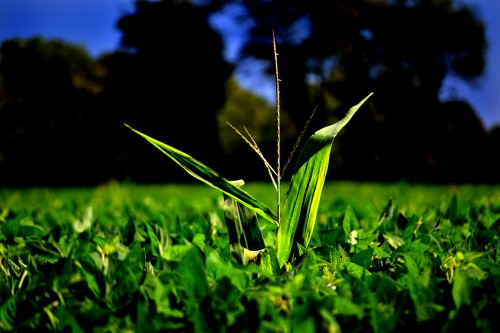 Funny what sticks with you from grade school. The teacher asked the class if they could say what a weed was.

“How about an oak?” the teacher asked.

“A weed,” the teacher explained, “is a wild plant growing where it is not wanted and in competition with cultivated plants. So, wouldn’t you consider an oak tree in the middle of a wheat field to be a weed?”

She had us there

So, somewhere back at Trinity Lutheran School, in the middle of the 20th Century, the seed of a weed oak tree was planted in my head.

You can click on the photo to make it larger. I’m sure somebody out there will tell me that that’s not corn in a soybean patch, that’s really a radish popping up in a field of rutabagas.